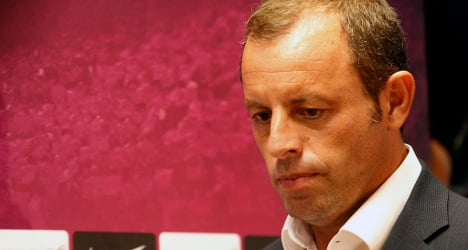 Pressure mounted on Barcelona President Sandro Rosell after a Spanish judge agreed to hear a case made against him for alleged misappropriation of funds. Photo: Quique García/AFP

"Today, Thursday January 23, at 18:00, there will be an extraordinary board meeting at the club offices," Barcelona said in a statement without elaborating.

Catalan sports daily Mundo Deportivo said in its online edition that Rosell had decided to resign and would announce his departure later in the day.

The paper, without giving a source, said Rosell would leave Barcelona in the hands of vice president Josep Maria Bartomeu until the end of his mandate in 2016.

Pressure mounted on Rosell after a Spanish judge agreed Wednesday to hear a case made against him by one of the club's own members for alleged misappropriation of funds in the deal which brought Brazilian star Neymar to the club last year.

Catalan daily La Vanguardia said in its online edition on Thursday afternoon that Rosell would resign as did national daily El País, both without quoting a source.

Rosell has routinely insisted that the 21-year-old Neymar cost the club €57.1 million ($77 million), but refused to divulge how much money each of the parties to the deal received on confidentiality grounds.

That led Barcelona member Jordi Cases to launch the case against Rosell last month for not informing the club's members as €40 million ($54m) of the fee was supposedly paid to a business owned by Neymar and his father called N&N.