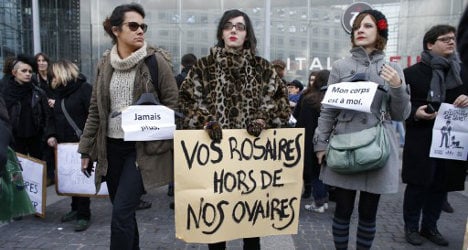 Women hold placards reading "Never again" (L), "Your rosaries out of my ovaries" (C), and "My body is mine" (R) as they demonstrate in Paris on Sunday. Photo: Thomas Samson/AFP

Her broadside came amid a debate on a controversial new abortion law in France that would scrap a requirement for women to prove they are in distress to legally terminate a pregnancy.

"The proposed Spanish law constitutes an unprecedented regressive step that will take women back to the Stone Age," Touraine said in her New Year wishes to the press.

She called for action to ensure that "this proposal is not accepted."

Spain's conservative government, under pressure from the Catholic Church, last month said it would roll back a 2010 law allowing women to freely opt for abortion in the first 14 weeks of pregnancy.

The legislation, yet to pass parliament where the ruling Popular Party enjoys an absolute majority, would allow abortion only in cases of rape or a threat to the physical or psychological health of the mother.

France's leftwing-dominated parliament Monday started debating a wide-ranging bill, including a proposal allowing a woman to obtain an abortion at will up to 14 weeks into a pregnancy.

Under a 1975 law, the woman must prove that having a baby would put her "in a situation of distress".

The new French bill would also punish those who try to prevent a woman from entering places where she can receive information on abortion.

France records around 220,000 abortions a year, and it is estimated that around one Frenchwoman in three undergoes the procedure in her lifetime.

The state health system began reimbursing abortion costs about a year ago.

The changes in France are part of a wide-ranging new legislation on gender equality. The other measures include extending paternity leave to six months and scrapping beauty pageants for girls under 13.

PARTNER CONTENT
Would your career benefit from an EMBA?
Url copied to clipboard!