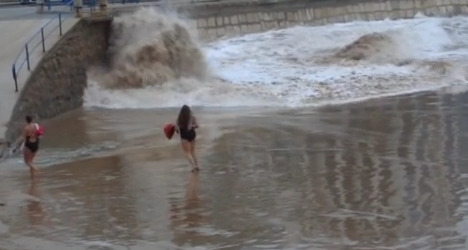 The woman almost managed to escape from the beach before the wave caught her. Screen grab: Vimeo/Morenuuus' Creatives

In the video, onlookers can be seen watching on helplessly as the wave nears the woman at Santander's Sardinero Beach.

She appears oblivious to the rapidly approaching water and continues dancing.

While her companion makes it safely onto the concrete walkway leading away from the beach, the dancer is caught by the wave at the last moment.

She is then swept along the length of a stone wall backing the beach as spectators watch on in shock.

Amazingly, she escaped with only minor bruises, according to the UK's Metro newspaper.

The storms also saw the death of man in the Spanish region of Galicia who was swept out to sea while scattering the ashes of his dead father.

Two other family members are still missing while the deceased man's daughter managed to find her way back to shore.