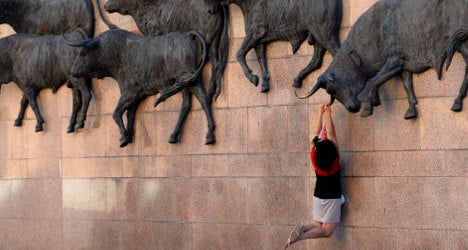 A girl hangs from a sculpture representing bulls as she poses for a picture outside Las Ventas bullring in Madrid. Photo: Gerard Julien/AFP

Foreign tourist arrivals surged by 5.6 percent in the year, the government said, boosting the eurozone's fourth largest economy after a long, job-wrecking recession.

"The new figures for 2013 allow our country to retake the number three position in this indicator after having overtaken China," Prime Minister Mariano Rajoy boasted.

Spain now stood behind only France with 83 million international tourist arrivals and the United States with 67 million, Rajoy said.

Income from foreign tourists hit record levels, too, a significant contribution to the Spanish economy, which has just emerged from five years of stop-start recession that left the nation with a 26-percent unemployment rate.

Spending by international tourists in the first 11 months of 2013 surged by 8.7 percent from the same period last year to €55.9 billion ($76 billion), government figures showed.

Even without the official figures for the whole year, it is already possible to say that 2013 was a record in terms of tourism spending, Rajoy said.

"The implications of these figures are clear to everyone," Rajoy said.

The tourism industry accounted for 10.9 percent of Spain's total economic output in 2012, and 11.9 percent of all jobs, the prime minister said.

British tourists led the way to Spain in 2013, with some 14.3 million of them accounting for 23.6 percent of all foreign tourists, said the report by Spain's Industry, Energy and Tourism Ministry.

Next came Germany with 16.2 percent of the total, France with 15.7 percent, and Nordic countries with eight percent.

Russian tourists accounted for 2.6 percent of the total, but their numbers showed the biggest leap, soaring by 31.6 percent from the previous year.

Besides Spain's attractions, such as its beaches, the tourism industry said it benefited last year from misfortune in Egypt, where political turmoil scared away visitors.

Many of the visitors diverted from Egypt were budget tourists, however, Zoreda said.

Spain's economy emerged from a two-year downturn by posting 0.1-percent growth in the third quarter of 2013.

The economy expanded by 0.3 percent in the final quarter, Spain's prime minister said, confirming an estimate by his finance minister ahead of the release of official data.

The Spanish government is tipping an overall economic expansion of 0.7 percent in 2014.