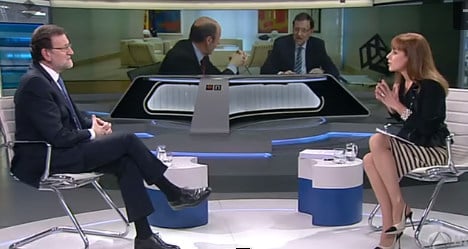 "I am convinced things will turn out all right for" Princess Cristina, said Prime Minister Mariano Rajoy in a 40-minute interview with Spanish broadcaster Antena 3.

Everyone is equal before the law and everyone — including the princess — is innocent until proven guilty, Rajoy added before stating, "I am convinced of her innocence".

The comments were Rajoy's first in public relating to the corruption scandal which has engulfed Spain's royal family.

They also came just weeks before Cristina's appearance in a Spanish court to answer questions about her knowledge of her husband Iñaki Urdangarin's business activities relating to a charitable sports foundation.

Urdangarin and a colleague are alleged to have embezzled €6 million ($8.1 million) from the foundation.

The princess and her husband are equal owners of Aizoon, a company suspected by the investigating judge, José Castro, of being a front for the diversion of embezzled funds.

Cristina's appearance in court on February 8th will be the first for a direct member of the royal family, and further threatens the credibility of the struggling institution.

Rajoy's bold defence of the Cristina was the most "surprising" feature of his interview, according to Spain's El Mundo newspaper.

The right-leaning daily said the Spanish leader had offered up little new information on topics from abortion and Catalan independence to jobs growth.

On abortion, Rajoy said his aim was to obtain "the maximum support possible" for a draft law which in its current form would see abortion banned except in cases of rape or where there is a threat to the mother's health.

But the Spanish PM tried to give the impression that the proposed law wasn't written in stone, Spain's El País reported.

"Abortion was on our electoral program. We have presented a programme and now it has to be looked at by different bodies," said Rajoy, who added he was "willing to talk".

On the issue of Catalan independence, the prime minister reiterated his message that "there will be no independence in Catalonia" while he is in power.

Rajoy also said a proposed 2014 vote on the region's right to decide on the matter of self-rule would not go ahead.

In terms of jobs growth, Spain's top politician once again said he expected to see growth during his current term in office, although he refused to be pinned down on numbers.

He said he planned to see out his term without any changes to his cabinet.