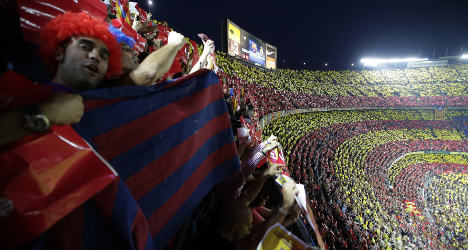 "The Board has unanimously decided to put the plan to build a new stadium on the structure of the Camp Nou to the shareholders," Rosell told a press conference.

"The option of building a new stadium in a new location has been ruled out … the final cost of the operation could jeopardize the club," said Rosell.

"The cost of going to Diagonal (the proposed new location) is very high, almost double," he said.

"It has been a difficult decision, the two projects were extremely attractive," he said, stressing that the responsibility of management "was to present viable project."

FC Barcelona director for economic and strategy Jordi Moix explained that the plans for the Camp Nou was a "complex technical project" which would cost an "acceptable" €600 million and would extend the venue's capacity from 99,000 to 105,000 spectators.

The new stadium would cost about €400 million and the remainder would cover the upgrading of facilities, club economic vice-president Javier Faus said.

FC Barcelona members can vote on the project in a referendum on April 5th and 6th.

If approved, the project will take place over the next six or eight years, said Faus.

Built in 1957, the Camp Nou is the largest stadium in Europe.