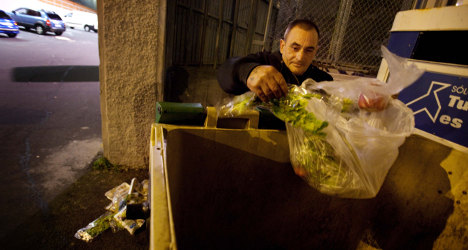 A man looks for food in a garbage container in January 2013 in Santa Cruz de Tenerife. File photo: Desiree Martin/AFP

These are the chief findings of a new report by UK charity Oxfam into the dangers of extreme economic inequality.

Titled Working For The Few, the report's release is designed to coincide with the upcoming World Economic Forum in Davos ,Switzerland, a meeting of the world's most powerful politicians and business leaders.

The report highlights the growing divide between the world's rich and poor and argues that extreme inequality is very dangerous but reversible.

Using data from the World Top Incomes Database, Oxfam argue that seven out of ten people live in countries where economic inequality has increased in the last 30 years.

At the same time, the rich are getting richer: the richest 1 percent increased their share of income in 24 out of 26 countries between 1980 and 2012.

In Spain, this is also the case, with that top 1 percent increasing their wealth from 2008 to 2012 despite the country's deep economic crisis, which has seen unemployment rise to 26 percent.

SEE ALSO: Ten reasons why you might not spot Spain's crisis.

Oxfam polling in Spain also showed eight out of ten people living in the country thought the laws were designed to benefit the wealthy.

"The economic, financial, political and social crisis that Spain is suffering at the moment are in large part the result of this dangerous dynamic where the public interest and the democratic process have been hijacked by the interests of a minority," said the director of Oxfam in Spain José María Vera.

But Oxfam are hoping world business and economic leaders will take action to buck this trend.

Oxfam wants the world's political and economic leaders attending Davos to sign a pledge promising they will not dodge taxes in their own countries or in countries where they  invest and operate, by using tax havens.

The charity is asking business leaders not to use economic wealth to exercise too much influence in politics, and to declare all their economic interests and assets. They also want companies to introduce minimum wages.
Oxfam is also calling on governments to use tax revenue to provide universal  healthcare, education and social protection for citizens.

"Some economic inequality is essential to drive growth and progress, rewarding those  with talent, hard earned skills, and the ambition to innovate and take entrepreneurial risks," the charity says in its report.

"However, the extreme levels of wealth concentration occurring today threaten to exclude hundreds of millions of people from realizing the benefits of their talents and hard work."