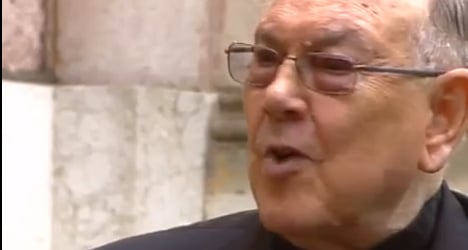 The 85-year-old Fernando Sebastián will take up office as Spain's newest cardinal in the Vatican in February. Screen grab: YouTube

"Homosexuality is a defective manner of expressing sexuality, because this [sex] has a structure and a purpose, which is procreation," Fernando Sebastián told Spanish local daily Diario Sur.

"A homosexual who can't achieve this [procreation] is failing," said the man who will take up office in the Vatican as Spain's newest cardinal in February.

The 85-year-old then went on to compare his own hypertension with the defect of homosexuality.

"Our bodies have many defects. I have high blood pressure," explained Sebastián.

"It's a defect that I have to try and correct in whatever way I can…To say that homosexuality is a defect is not an insult: it helps because in many cases of homosexuality it is possible to recover and become normal with the right treatment."

The comments from Spain's new cardinal come after Pope Francis publicly expressed compassion for homosexuals in July 2013. "If they accept the Lord and have good will, who am I to judge them? They shouldn't be marginalized," the Pope said.

In October, the Vatican also announced it planned to poll Catholics on their views on issues including homosexuality.

But Sebastián, who is originally from northern Pamplona and currently lives in the southern city of Malaga, said his own stance did not contradict that of the pontiff.

"The pope is very respectful and holds all people in high esteem but [he] doesn't betray or change the traditional teaching of the church," said the new cardinal.

"It's one thing to be compassionate towards a homosexual person and another thing to morally justify the practice of that homosexuality.

"You can tell a person what their weakness is but that doesn't justify [a decision] to respect them and help them," he added.

"I think that's the Pope's position as with gay marriage and divorce," said Sebastián.

The new cardinal's comments were condemned by Spanish gay rights group Colegas. In a statement on their website the group asked Sebastián to retract his words, saying they caused "only suffering and pain among many believers".

"Homosexuality is not a curable illness but homophobia is," said the group.

In his interview on Sunday, Sebastián also addressed the controversial issue of abortion, saying he was concerned the practice had become "normal" in Spanish society.

The cardinal-elect said the question was more "humanist" than "religious" and that legality or illegality of abortion came down to whether a healthy and sane woman was able to claim the right to end "a life inside her".

But it made no sense to view abortion as a cornerstone of "modernity", he stressed.

In December, Spain adopted a draft bill for a law which will allow abortion only in cases of rape or a threat to the mother's health.

Introduced by Spain's conservative ruling Popular Party in the wake of pressure from the Catholic Church, the planned law would roll back a 2010 law which brought Spain in line with much of Europe by letting women choose to have an abortion up to week 14 of pregnancy.

The bill has yet to be passed, but the Spanish government has an overwhelming majority in the country's parliament.