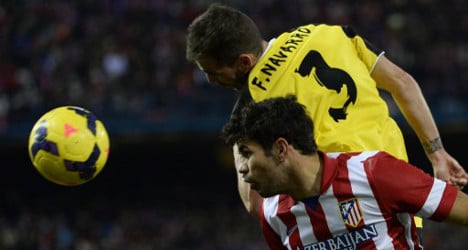 Earlier, Lionel Messi's first league start of 2014 couldn't inspire Barcelona to victory as they could only manage a 1-1 draw away to Levante.

That meant a win would take Atlético two points clear at the top and they appeared on their way to victory when David Villa opened the scoring on 18 minutes.

However, the visitors were awarded a controversial penalty when Juanfran pulled Carlos Bacca's jersey 17 minutes from time and Ivan Rakitic coolly converted from the spot.

A point for both the leaders means they now lead third-placed Real Madrid by just one point.

Buoyed by Barcelona's result earlier in the evening, Atlético started brightly and nearly took the lead in spectacular fashion when Diego Costa fired into the side-netting from fully 35 yards.

However, it took just 18 minutes for Diego Simeone's team to make the breakthrough as Diego Godin headed Gabi's corner back into the heart of the area, where Villa found space to fire home his first goal since November.

Sevilla reacted well to going behind and came close to levelling before the break as Coke's in-swinging effort flew just past the post.

Unai Emery's men continued to press after the break but hadn't been able to creat a clear-cut opportunity until Juanfran was adjudged to have pulled Bacca to the ground as they jostled at the back post. Rakitic slotted home his ninth goal of the season.

And despite the visitors being reduced to 10 men in the final minute as Alberto Moreno saw red for a late challenge on Raul Garcia, Atlético couldn't find the goal they needed to take them to the summit.

"We had a good chance to go top, but there is still a long way to go," said Atlético defender Filipe Luis.

"We are now a target and it is very difficult to compete with Real Madrid and Barcelona. The merit of what we have done can be seen in our opponents. Look at Sevilla, their bench celebrated the draw as if it was a final."

Barcelona were also frustrated at Levante as Joaquin Caparros's men gained some measure of revenge for being beaten 7-0 by the Catalans earlier this season.

Loukas Vyntra got the hosts off to the best possible start as he headed low past Victor Valdes from Andreas Ivanschitz's cross after 10 minutes.

The lead only lasted nine minutes as the visitors levelled in similar circumstances when Pique climbed highest to head home Xavi's corner.

Thereafter, though, Barca struggled to create opportunities against Levante's back five in the first period, with Xavi's drive from the edge of the box that drifted wide their best effort from open play.

Gerardo Martino's men were more precise in their build-up play after the break.

However, even when they did find a way through Levante's mass ranks of defence, goalkeeper Keylor Navas came to his side's rescue as he made fine saves from Cesc Fabregas, Messi and Cristian Tello.

"We created chances but we didn't have a good day in front of goal," said Barca boss Gerardo Martino.

"I don't think we should be worried looking to the future.

"There were games at the start of the season when we won and we didn't play very well. Today is completely the opposite. We played very well and the result is a bit negative, but it is not what we deserved."

Navas had to be at his best to deny Messi registering his first league goal since September on the hour mark after he had been played in by a neat one-two with Fabregas, before Juanfran blocked Xavi's follow-up effort on the line.

Juanfran again put his body on the line to turn another goal-bound effort from Messi behind moments later.

However, Levante maintained a threat on the counter-attack and Valdes had to get down to hold Ivanschitz's header from Ruben Garcia's cross.

Ivanschitz forced Valdes into another flying save 15 minutes from time as Barca left themselves exposed by pouring forward in search of a winner.

However, they came desperately close to that winner five minutes from time when Tello's curling effort was brilliantly turned behind by Navas.