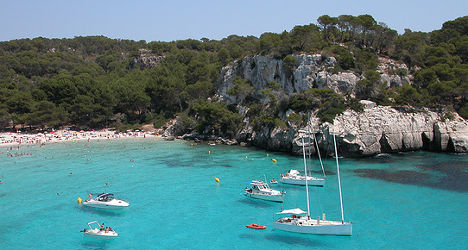 The Huffington Post's viral gallery comes as new tourism data reveals how popular Spain continues to be as a tourism destination. Photo: Scris/Flickr

The travel piece, which steers clear of the country's economic crisis, has been shared some 34,000 times on Facebook and tweeted more than 2,000 times.

It lists the following as reasons to visit Spain:

"1)The Mediterranean coast is paradise

2)…and the mountains are just around the corner.

3) It has the best restaurant in the world

4) …and the oldest restaurant in the world

5) There are Egyptian temples

8) The parties are legendary

9) …and there are dozens you still haven't discovered.

10) There are amazing cathedrals…

13) The whole place is riddled with hidden beaches

14) It produces the best wine in the world…

16) You can visit Salvador Dalí's house…

17) …and eat chicken grilled on an active volcano.

18) People decorate their houses like this (Córdoba flower houses)

19) There are countless varieties of paella

Geared mainly towards a US audience, readers' reactions to the gallery have been overwhelmingly positive although some readers pointed out omissions.

“They forgot the most important factor: the PEOPLE," wrote one commentator.

"….and some of the most beautiful women in the world," pointed out another.

"That's it: I'm moving to Spain!," was by far the most common reaction to the gallery.

Spain's edition of The Huffington Post decided to run the piece under the headline "20 reasons why foreigners are jealous of us", translating the points provided by their US counterparts.

Aside from acting as a reminder to Spaniards of everything that their country has to offer, some readers have pointed out mistakes and generalizations cited by Minube, the social travel platform that provided ‘The Huff’ with the list of Spain's assets.

"Spain isn't a doughnut," wrote one reader. "You haven't included a single photo of Castile-La Mancha, Castile and Leon or Aragon, which make up more than 40 percent of our territory."

See The Local's list of Spain's most beautiful villages

"As always, foreigners see Spain as beach, wine, paella, San Fermines and nothing else. I'm surprised they didn't include bullfighting to round off the list of clichés," another commentator added.

"It's all very nice and that, but I can think of 200 reasons to be jealous of other countries. Spain's great…to go on holiday."

"I'm surprised they're not jealous of our unemployment rate and corrupt politicians," joked one reader.

The Huffington Post's viral gallery comes as new tourism data reveals how popular Spain continues to be as a tourism destination.

An unprecedented 60.4 million foreign visitors came to Spain in 2013, according to a report by industry association Exceltur.

The tourism body also drew attention to the disparity in numbers between Spain's coast and the country's interior.