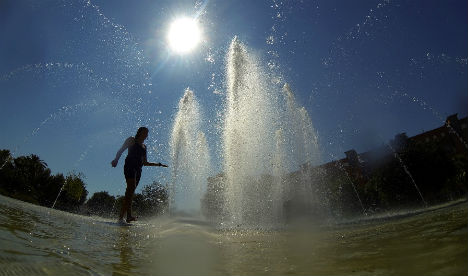 A youth cools off in a fountain of Sevilla where temperatures exceeded 40 degres last August . AFP Photo/ Cristina Quicler

The visitors came mostly from Britain, Germany and France, with a jump in Russian tourist numbers, too, it said.

"It was a really good year which gives us a lot of hope after some difficult years," Exceltur president Amancio Lopez told AFP.

Indeed, tourism is pivotal to the Spanish economy, which emerged in the third quarter last year from a two-year recession, still dragged down by a 26-percent unemployment rate.

"We think tourism should be an engine to help improve the Spanish economy, as it always has been," Lopez said.

But Spain believes it can better exploit its attractions.

"Obviously, the most sought-after destinations are for sun and beach holidays whereas urban tourism has suffered a bit," Lopez said.

"I think Spain has a richness not only for sun and beach holidays but also for cultural, gastronomic and lifestyle holidays," he said.

Though industry estimates have yet to be confirmed by government numbers due Tuesday, Spain clearly enjoyed a boom in 2013.

"It was a really good year," said Jose Luis Mendez, treasurer of the Spanish Confederation of Travel Agencies, CEAV, which estimated foreign tourism numbers in 2013 at "close to 60 million".

Tourism, like the automobile industry, accounts for about 10 percent of Spanish economic output and last year's performance should place Spain as the world's number three destination.

Like his colleagues, Mendez said Spain had been typecast as a sunny beach market, overshadowing a wealth of cultural, gastronomic and rural destinations.

Britons and Germans tended to prefer the Canary Islands off Africa, French tourists were drawn to Catalonia, and Russians liked both Catalonia and the Balearic islands such as Majorca, Mendez said.

Besides Spain's own attractions, however, one of the keys to its success in 2013 was misfortune in Egypt, where months of violent clashes and demonstrations turned visitors away.

But tourists hardly stepped foot in Spain's interior, where destinations were already suffering from a decline in domestic Spanish tourist numbers because of the economic crisis.

"The results were not good in the cities, except for Barcelona," Zoreda said, with Madrid doing worst and all inland tourism down except for the wine-growing Rioja region.

The Rioja region in Spain's north specialised in wine tourism, providing a good example for other parts of the country, the tourism official said.

"Spain must grow with a distinctive element of its own," he said.

However, "a large proportion of the demand we got from Egypt has been budget tourism," Zoreda admitted, urging Spain to develop a higher-quality, more diverse offer.

More than half of Spanish tourism businesses — 54.8 percent — reported lower profits last year, according to Exceltur.

"The situation clearly benefited sun and beach tourism. Nevertheless we are facing difficult situations in other areas that rely on domestic tourism and have not been able to benefit from foreign tourism," agreed Juan Molas, president of the hotels confederation CEHAT.

"You must not forget that 70 to 80 percent of our visitors choose beach destinations," Molas said.

"That is the great challenge for Spanish tourism: to sell and spread the word about all the tourism products in the rest of Spain."