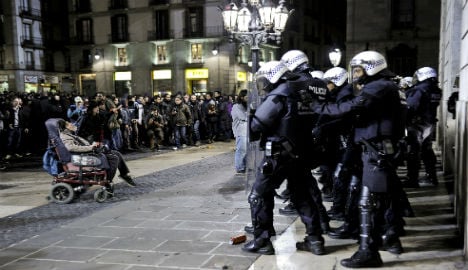 A disabled protestor in a wheelchair faces policemen during a demonstration in Barcelona on Friday in support of locals from the city of Burgos. AFP Photo/Josep Lago

"It is physically impossible to carry out this reform and we have decided to halt the works indefinitely in favour of harmony in the city," Mayor Javier Lacalle told a news conference.

Thousands of protesters around the country turned out in sympathy with the demonstrators in Burgos, many of them denouncing corruption and Spain's 26-percent unemployment rate.

The revamp of the city's Calle Vitoria had a price tag of €8 million ($11 million).

It would have reduced driving lanes from two each way to just one each way, added a bike lane and green spaces and replaced free parking spaces with a paid underground car park.

Residents in the working-class district of Gamonal fumed over the resulting reduction in parking and traffic flow, as well as the city's spending priorities at a time when public services are being cut.

The project reawakened frustration over property speculation of the type that fuelled Spain's decade-long real estate bubble, which imploded in 2008 plunging the country into a recession and destroying millions of jobs.

Nightly protests began on January 10 in Burgos and spread across to cities around the country.

In Burgos, Madrid and other cities, they degenerated at some points into clashes and street chases between truncheon-wielding police and protesters.

Protesters had set up a small encampment to prevent the works proceeding in Burgos, a normally quiet city of 170,000 that is known for its dark-stone old town and castle and a statue of the medieval adventurer El Cid.

Despite the mayor's decision to abandon the revamp, thousands of people protested again Friday night in Burgos and in some 20 other towns and cities around Spain.