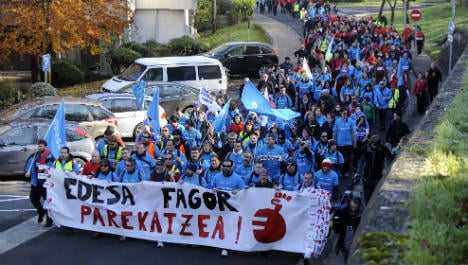 "Txema Gisasola has resigned as president of the general council for personal reasons," Mondragon said in a statement.

Mondragon, made up of workers' cooperatives operating worldwide in industry, retailing and finance, said it was opening a period of analysis to decide a framework for action over the next few years.

"In the current situation of economic crisis, Mondragon Corporation believes it is necessary to undertake this period of 'collective analysis, reflection and debate' in order to tackle confidently the challenge presented by the global economic crisis," it said.

A new president would be chosen after the period of reflection, Mondragon said.

Mondragon, based in a small Basque town of the same name, was founded by a local priest, Jose Maria Arizmendiarrieta, as a small workers' cooperative and
is now an international conglomerate with a mission of maintaining jobs.

Despite its international presence, Mondragon's cooperative structure has kept most of its jobs and production at home.

Mondragon said there was no possibility of changing its cooperative model.

"The corporation completely reasserts its trust in the cooperative model as a driving force for generating wealth and is firmly committed to the future of the community it is part of," it said.