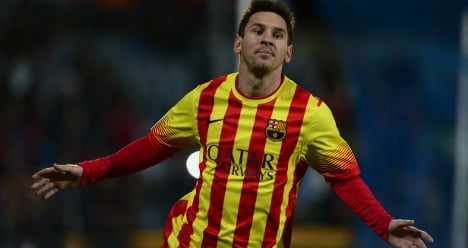 However, it was far from a perfect evening for the Catalans as Neymar had to be carried from the field after suffering a nasty looking right ankle sprain midway through the first-half. Barça boss Gerardo Martino, though, played down fears that the Brazilian could be sidelined for a significant period of time.

"We don't think it is as bad as it appeared on television. He could be out for a period of time, but it shouldn't be too serious, the player is fine," he said.

"I prefer that the doctors say exactly how long he will be out, but we don't think it will be for a long time."

With his side already leading 4-0 from the first-leg, thanks in part to two goals from Messi on his first appearance as a substitute after two months out, Martino made nine changes to the side that started Saturday's La Liga 0-0 draw at Atletico Madrid.

Neymar was also making his first start of the year after recovering from a bout of gastroenteritis.

However, his return lasted only 23 minutes as he had to be helped off the field by two members of the Barca medical staff as he turned his ankle in attempting to cross the ball from the left side of the area.

The visitors shrugged off the loss of the Brazilian, though, as Cristian Tello's driven cross was turned in at the near post by Messi two minutes before half-time.

And the best was still to come from the diminutive Argentine as he danced past three Getafe challenges before rounding goalkeeper Jordi Codina and finishing from a tight angle for his fourth goal of the tie just after the hour mark.

Messi went on to complete the 90 minutes and Martino said he was now confident that his compatriot is now fully match fit.

"He was out for 60 days, but physically he feels good and you can see he is now ready to play the 90 minutes. It was just a matter of time until he did it."

Martino also took the opportunity to hand Xavi Hernandez his 700th appearance for the club as he replaced Cesc Fabregas with 20 minutes remaining.

Messi — who watched on as Cristiano Ronaldo claim the Ballon D'or recently — should have rounded off his evening with a hat-trick on 85 minutes as he was played in with just Codina to beat, but the keeper made a fine save with his right leg to turn the ball behind for a corner.

It mattered little in the overall complexion of the tie, however, as Barca set up a meeting with Levante in the last eight.