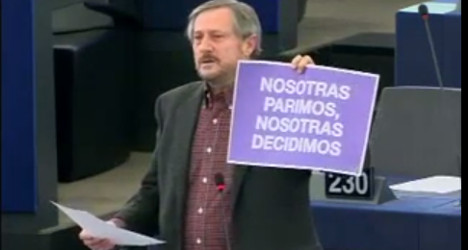 Spanish left-wing MEP Willy Meyer holds up a sign reading "We give birth, we decide" during a debate on Spain's abortion law in the European Parliament on Thursday. Screen grab: YouTube

The draft bill which will only let women have abortions if they have been raped or if the mother's health is at risk has been widely criticized within Spain and abroad since being announced just before Christmas.

The law has yet to be passed but the government holds a clear majority in the Spanish parliament.

On Thursday, the issue was on the agenda at the European Parliament with many political groups in the EU calling for the law to be relegated to the scrapheap.

"Rajoy's project is taking us back to the dark ages," French socialist Pervenche Bères was quoted as saying in Spain's El País newspaper.

"The government has forgotten that newborns, children are living in Spain at this time below the poverty level, because the law forces women to have children with disabilities, while, at the same time, benefits to poor families are being withdrawn," said Spanish centre-left MEP Iratxe García Pérez during the fiery debate.

But not all voices were in support of Spain's left wing.

"Parents have a right to raise their children without the intervention of the state," said the former president of Lithuania and Eurosceptic Rolandas Paksas.

"I'm very happy to live in a country where people like you don't have the right to make decisions about my body or my life," responded Sophia in’t Veld, a liberal with the Democrats 66 group.

The passions aroused by the debate in the European Parliament follow on from demonstrations and anger in Spain.

Groups opposing the planned changes to the country's abortion law say the reform will see Spain returning to conditions similar to those of a more restrictive 1985 law.

Spain's Justice Minister Alberto Ruiz-Gallardon, with the country's ruling conservative Popular Party (PP), said the new bill would penalize those who carry out abortions but would not criminalize women for having the procedure.

On the other hand, it would toughen the conditions for aborting in cases of malformation, which the current law authorizes freely up to 22 weeks. It would also oblige girls aged under 18 to get their parents' consent to have abortions.

Cracks have already appeared in the Spanish Government with several figures within the party saying the abortion law goes too far.

Spain's opposition socialist PSOE party, meanwhile, has made a bid to sabotage the bill by calling for the parliamentary vote to be held in secret.