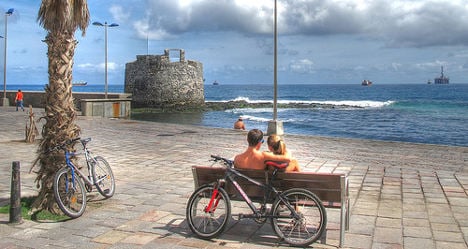 Jose Luis Zoreda, vice president of Exceltur said the strong performance of the sector was "due exclusively to foreign demand", while domestic demand tumbled as about one in four Spaniards was out of job.

"Spanish demand fell in 2013 to levels below that of 2004, even though in the last quarter of the year, it showed signs of recovery," he said.

Egypt "lost about 2.5 million tourists since June, and curiously Spain saw its tourist arrivals increase by 3 million," he noted.

Britons, Germans and French made up the biggest groups of visitors in 2013.

"In 2014, we believe that the tourism sector will be the engine of growth for the Spanish economy," Zoreda said.

He forecast that the sector would grow by 1.8 percent this year, well above the 0.7 percent expansion seen for Spain's overall economy.

Spanish authorities are due to publish official visitors data next Tuesday.

Spain recorded 57.7 million visitors in 2012, coming in as the world's fourth most popular tourist destination, just after China, data from the World Tourism Organisation showed.