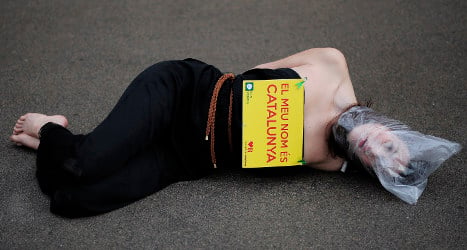 An woman with a a banner reading "My name is Catalonia" outside the region's parliament during a vote for a petition to the national parliament, in Barcelona on Thursday. Photo: Josep Lago/AFP

Catalan political chief Artur Mas's ruling coalition and a majority of other parties in the northeastern Spanish region are calling for a November 9th, 2014 referendum that would ask voters two questions:

With 87 votes in favour, 43 against, and three abstentions, Catalan lawmakers agreed to submit a proposed law to the national parliament in Madrid, which would delegate to the region "the capacity to authorise, convoke and organize a referendum on the political future of Catalonia".

The proposal appears doomed from the start, however, given that a Catalan independence referendum is opposed by Spain's two largest national parties: the ruling conservative Popular Party and the main opposition Socialist Party.

"It is unconstitutional and it will not take place," Rajoy told a news conference just hours after the plan was unveiled.

"This initiative collides head-on with the foundation of the constitution which is the indissoluble unity of the Spanish nation," the premier said.