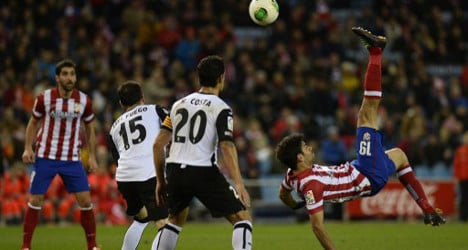 Valencia responded well to going behind, but just as in the first-leg they found it difficult to beat Thibaut Courtois as the Belgian produced fine saves to deny Helder Postiga and Michel.

And Atlético sealed victory when Raul Garcia headed home another corner a minute from time to set up a meeting with Athletic Bilbao or Real Betis in the last eight.

Atlético boss Diego Simeone made just two changes to the side that drew 0-0 with Barcelona in a top of the table clash on Saturday as new signing Jose Sosa made his debut.

However, it was the other new face in the starting line-up, Garcia, who came closest to opening the scoring in the first-half but he just failed to connect with Juanfran's low cross.

The hosts did make the breakthrough just after the break as Valencia keeper Vicente Guaita got caught under Gabi's delivery to allow Godin to head into an empty net.

In a mirror image of the game at the Mestalla last week, Atlético's goal sparked Valencia into life.

Yet, they were again met by an in-form Courtois as the Chelsea loanee firstly leapt to his left to beat away Postiga's volley before turning behind Michel's accurate long-range effort.

Garcia then made the game safe with a powerful header from another Gabi corner.

Third-tier Racing Santander also continued their amazing cup run as they became the first side into the quarter-finals by winning 2-0 away at Almeria to progress 3-1 on aggregate.

The Cantabrian side, who are currently in administration, will face Real Sociedad or Villarreal in the next round.