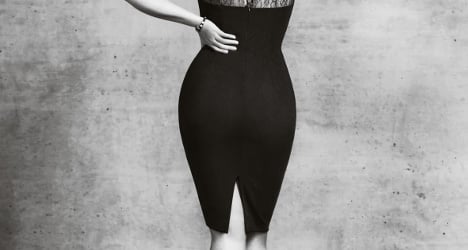 Mango's Violeta range features clothes from size 40 (UK size 12, US size 8) to size 52, and is the Barcelona-based group's first collection for larger women.

The Violeta line currently features some 400 garments under the slogan "It suits me and I like it". Mango plans to add new items to the collection every month and is even looking at opening four stores dedicated to the range, the company said in a statement.

But while the Spanish brand doesn't advertise the range as "plus-sized", the collection has generated its fair share of controversy.

A campaign calling for the immediate withdrawal of the Violeta line on online petition website has attracted nearly 60,000 signatures.

The petition’s text points out the Mango clothing campaign could cause cases of anorexia and bulimia with young women believing themselves to be overweight because they wear size 40 and 42 clothes.

"It is unjust for a firm to decide to produce a plus-sized line from size 40 upwards because it divides up the population," the woman behind the petition, Arantxa Calvera, told Catalan daily newspaper La Vanguardia.

Calvera pointed out that 38 and 40 were the most popular sizes in Spain, and that Spain's Ministry of Health declared in 2007 that sizes 48 and up could be considered "special".

Psychologist Carme Brit, meanwhile, said the Mango campaign sent out mixed messages depending on the maturity and confidence of women.

The collection emphasized difference and could make women feel discriminated against, she told La Vanguardia.

At the same time, some could see the new sizes as an opportunity.

"Mango should redesign its campaign with a cohesive message showing that there is nothing discriminatory about the larger sizes," said Brit.

The psychologist added that the use of curvier models for the Violeta collection wasn't helpful either because "curves aren't the same as a larger size".

In early 2013, Mango landed itself in hot water after it accidentally advertised a necklace on its website as "slave style".

The fashion house pinned the blame for its faux-pas on an incorrect translation from Spanish.

The caption in French read "collier (necklace) style esclave". However, in Spanish "esclava", has two meanings: it can refer to a female slave, or to a simple bangle or bracelet.