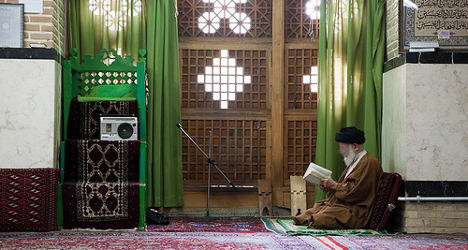 "If we had known he was wanted for drugs charges we would never have let him be an iman," said the head of the mosque. File photo: Kamyar Adl

The man went on the run after being was sentenced to prison by a court in the southern Spanish city of Algeciras last year.

He arrived in the Spanish island of Majorca several months ago where he offered to work as an imam at the Abderraman de Pere Garau mosque, local daily Diario de Mallorca reported on Wednesday.

"He said he know the Koran. We quickly saw he didn't have sufficient (knowledge), " said Juan Peralta, who is responsible for operations at the mosque.

But the mosque's regulars where still shocked when 'Omar', as he called himself, was taken away by police.

"If we had known he was wanted for drugs charges we would never have let him be an iman," said Peralta.

"He behaved very well. He was very respectful with people," he added.

"He was with us for four months but he didn't have the requisite knowledge to be am imam so we had to let him go. But if had possessed sufficient knowledge, he would stayed with us," the mosque official told Diario de Mallorca.

The drug trafficker was finally arrested after police spotted his name in the guest register at a Majorca hotel on January 8th.

"We hope this never happens again," said the head of the Abderraman de Pere Garau mosque.

"We have a new iman and he comes highly recommended," he added.