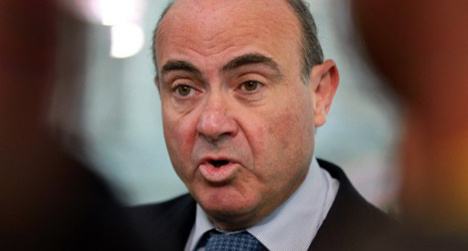 "The recovery is fragile but it is a recovery," he told a parliamentary hearing.

The Spanish economy returned to growth in the three months to September, putting an end to a recession that lasted over two years, ravaged public finances and left one-in-four workers without a job.

Spain's conservative government is forecasting a 1.3-percent economic contraction in 2013 and 0.7-percent growth in 2014, a pace considered by many analysts to be insufficient to lead to net job creation.

The government, which took power in December 2011, has enacted reforms making it easier to change work conditions and cheaper to lay off staff in a bid to revive the economy.

But Spanish Prime Minister Mariano Rajoy recently said there would be new jobs in Spain in 2014.

December also saw 64,097 finding work and signing onto the country's social security system. But the social security registered a negative year-on-year figure with 88,000 fewer subscribers than at the end of 2012.