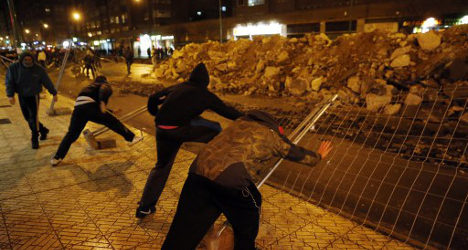 The reason for their discontent was none other than their town hall’s decision to remodel a central four-lane street into a tree-lined boulevard with an underground car park.

Since the violent street demos began on Friday, 11 police officers have been injured and 40 people have been arrested.

"The mayor is going to have to do something about all this because we're not moving."

Around 200 people gathered on Monday morning to prevent the €13 million construction plans in the city's Gamonal neighbourhood from resuming.

They are also demanding the release of the 40 people arrested, El País reported.

They claim that two months of peaceful protests fell on deaf ears as Burgos' Town Hall continued with its plans to reduce the amount of traffic and parking spaces available in one the city’s most populous neighbourhoods.

Gamonal residents are now taking turns to barricade the construction site with no less than 100 people at any time.

Burgos mayor Javier Lacalle said the acts of violence were "the reaction of a very small radical group" and "did not represent neighbourhood residents in any way."

"Neither they nor the rest of the city deserve this."