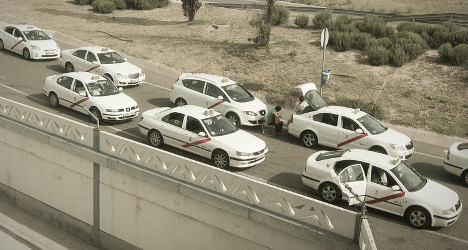 The new fare regime means all trips from the airport to any point within the Spanish capital's M-30 ring road should be subject to a charge of €30.

The idea behind the introduction of the tariff was to stop dishonest taxi drivers scamming tourists by taking them on longer than necessary routes.

But anecdotal evidence suggests the ploy hasn't paid off: some drivers now finding other ways to increase their cut, as Spain's El Mundo newspaper reported recently.

Two US tourists told the daily they had paid €45 for the trip from the airport to a downtown location. The meter read €30 but the "very friendly" driver hit them with a surcharge.

"We feel a bit cheated," said the pair from Connecticut, who hadn't thought to ask for a receipt.

In another instance, news agency Efe reported on passengers who were hit with a fare of €67, with three different fares being added together for different parts of the journey.

Other stories of random surcharges being paid have also emerged, while El Mundo says stands selling taxi vouchers at the airport are even stating the €30 fare is only approximate.

And while customers told the daily the new fare seemed like a good idea, taxi drivers fear they are going to lose business.

On Monday the Professional Association of Madrid Taxi Drivers issued a press release saying they were "abusive". They argue the new tariff means some people end up paying more for their trip than they would if charged per kilometre.

The spokesperson for consumer organization Facua, Rubén Sánchez, told El País newspaper the €30 price as "brutal" and said many people would end up using alternative means of transport when they went to the airport.

The Facua spokesperson also said passengers who felt they had been cheated should get a receipt and fill in an official complaint form (hoja de reclamaciones).

If the driver doesn't supply this document, customers should advise the police that this document wasn't available. They are also within their rights to not pay the fare.

Under the new fare system, trips to points within Madrid which lie outside the M-30 are subject to a minimum charge of €20.