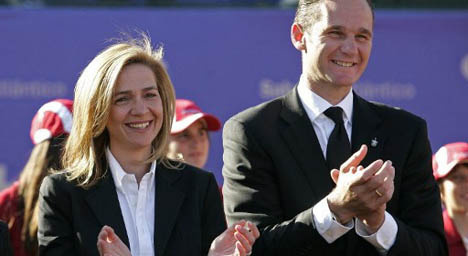 The king's youngest daughter, 48, will become the first of his direct relatives ever to appear in court accused of wrongdoing when she answers the summons, in a scandal that has plunged the royals into crisis.

Lawyers defending the princess, known as the Infanta, insist she is innocent of the accusations of tax fraud and money-laundering, but dropped plans to appeal the summons so as not to draw out the process.

Judge Jose Castro on the island of Majorca therefore moved forward the date of her questioning as a formal suspect by a month to February 8th at 10:00am (0900 GMT), a court statement said.

"We have decided to testify because the Infanta considered that she had to do so to clarify the situation," her lawyer Miquel Roca told reporters on Monday.

"She is absolutely convinced of her innocence and that once she has testified everything will be decidedly clear."

The case is linked to the business affairs of Cristina's husband, former Olympic handball player Inaki Urdangarin, who is himself under investigation for alleged embezzlement of public funds.

The investigation could lead to formal charges being brought against Cristina, but neither she nor Urdangarin have so far been formally charged with any crime.

The case is a major blow to Juan Carlos, 76, who has long been widely respected for helping guide Spain to democracy after the death in 1975 of General Francisco Franco.

The king's standing has been damaged by the corruption scandal and by outrage over a luxury African elephant-hunting safari he took in 2012 as his subjects suffered in a recession.

A string of health problems together with the scandals have raised speculation about the future of his reign.