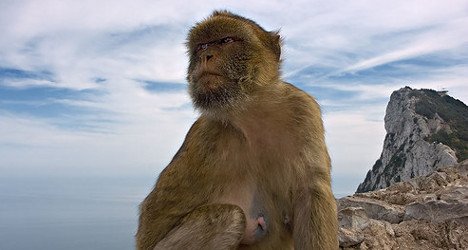 Legend has it that if the apes ever leave the mountain, Gibraltar will cease to be British. File photo: forsterphoto/Flickr

Feeding the famous monkeys has been punishable with fines for some time, but enforcement of the regime has been relatively lax.

Now the UK-held territory is looking to clamp down on the activity with a regimen of fixed fines, the Gibraltar Government said in a recent media release.

People who feed the monkeys within Gibraltar's Upper Rock Nature Reserve will be slapped with a fixed fine of £500 (€600) if the rules changes are introduced.

Giving the macaques food outside of the nature reserve will mean a smaller fine of £250.

Under the proposed changes, officers from Gibraltar's  Department of the Environment and the Environmental Agency will be able to issue tickets to offenders, as well as police.

SEE ALSO: The Local's List of ten things you didn't know about Gibraltar

"Feeding of monkeys in built-up areas continues to be one of the major reasons why they spend time there," said Gibraltar's environment minister John Cortes.
"By increasing the officers able to police this, and making the fines, while still significant, more realistic, we hope the message will get through and offenders will realize that they have a responsibility to cooperate in keeping monkeys away, and that they will be fined if they choose not to," Cortes added.
Gibraltar's colony of Barbary macaques is the only one of its kind outside northern Africa. The monkeys are a major tourist attraction and the animals have become used to people, which has caused problems for the territory.
"They've lost their fear of humans and regard them as a source of rich food," Cortes said after some 60 people were bitten by the animals in 2012.
Spain ceded the 6.7 square kilometre (2.6 square mile) territory of Gibraltar to Britain in 1713.
Legend has it that if the apes ever leave the mountain, Gibraltar will cease to be British.