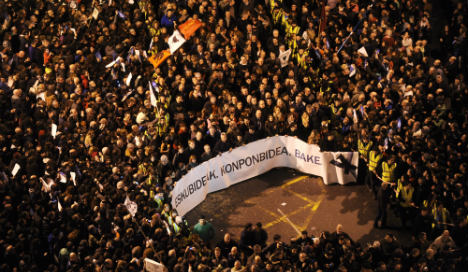 Crowds filled the streets in the northern city of Bilbao in a march for "human rights, understanding and peace", after a judge banned another demonstration planned to demand concessions for the prisoners.

The treatment of imprisoned ETA convicts is one of the most delicate issues in a standoff between the authorities and western Europe's last major armed secessionist movement.

Organisers had called for a silent demo but cries of "Basque prisoners home!" rang out and demonstrators applauded prisoners' family members who marched with white scarves around their necks.

ETA is blamed for 829 killings in its four-decade campaign for an independent Basque homeland in northern Spain and southwestern France.

A judge at Madrid's top criminal court on Friday issued a ruling prohibiting a demonstration that was called explicitly in support of the prisoners, saying it was organised by a banned group.

Basque nationalist and separatist political parties then weighed in, calling a new "rights" march on Saturday evening, which drew many supporters of the prisoners.

They called for jailed ETA members to be moved to prisons closer to their families.

One of them, Itziar Goienetxia, 52, said she lived in the Basque country and had to travel 1,200 kilometres there and back for a 40-minute visit to her husband in jail in the southern town of Cadiz.

"It's a double sentence," affecting her as well as the prisoner, she told AFP.

The conservative Basque National Party which governs the region and a left-wing pro-independence grouping joined forces in calling the march, in a rare joint show of strength.

Between them they accounted for more than half of the votes in the last regional elections, as pro-independence Basques set their sights on a political solution.

"Parties and unions that represent the political majority of this land decided they had to call this demonstration to defend the right to freedom of expression," Pernando Barrena, spokesman for left-wing party Sortu, told AFP.

The spokesman for the regional government, Josu Erkoreka, earlier said the ban on the original demo was "incomprehensible to the Basque people".

The victims' association AVT applied to have the new demonstration banned too, saying it gave "grave offence to each and every victim of terrorism," in a statement.

"The only aim of the initiative is to pay homage to prisoners of the terrorist group ETA," the association said.

A judge on Saturday ruled that the new gathering called by the parties was not illegal however, a court source said.

Spanish and French leaders refuse to negotiate with ETA, which is branded a terrorist organisation by the European Union and the United States.

The group has been weakened in recent years by the arrests of its senior leaders in Spain and France.

In 2011 it declared an "end to armed activity", but refused to formally disband.

Groups supporting the prisoners say there are about 520 inmates who remain affiliated to ETA, most of them dispersed in jails around Spain and France.

Only a few dozen active militants are estimated to be still at large.