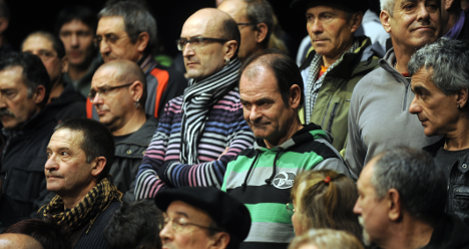 The treatment of Eta's jailed members is one of the most sensitive issues in a standoff between the Spanish and French governments on one side and western Europe's last major armed secessionist movement on the other.

Eta is blamed for 829 killings in its campaign for an independent Basque homeland in northern Spain and southwestern France. In 2011 it declared an "end to armed activity", but refused to formally disband.

The demonstration planned for Saturday in the Spanish Basque city of Bilbao is an annual event but came this year at a particularly tense time.

Recent declarations by prisoners' groups have outraged victims' families and on Wednesday police arrested eight people accused of links to the prisoners.

The judge believed the demonstration was organised by a banned support group called Herrira, which was broken up in October, according to a written ruling.

A group representing the prisoners last month said they had softened their demands on the conditions of their imprisonment, in an apparent attempt to engage the Spanish and French governments.

It said they were prepared to drop their insistence on a general amnesty and instead seek their release through legal channels.

Spanish and French leaders refuse to negotiate with Eta, which is branded a terrorist organisation by the European Union and the United States.

The group has been weakened in recent years by the arrests of its senior leaders in Spain and France.

Groups supporting the prisoners say there are about 520 prisoners who remain affiliated to Eta, most of them dispersed in jails around Spain and France.

Saturday's demonstration was to call for jailed Eta members to be moved to prisons closer to their families.

Dozens of Eta members including convicted killers have been released under a ruling in October by the European Court of Human Rights, which outraged associations representing victims' families.