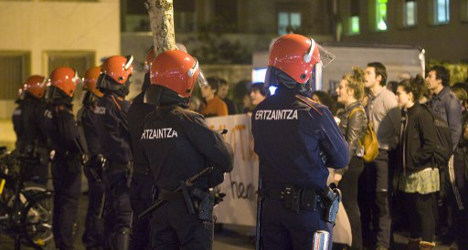 Basque Ertzaintza (Public Guard) and demonstrators during a protest against the arrest of 8 members of a group supporting prisoners from Eta on Wednesday. Photo: Ander Gillenea/AFP

The raid on Thursday led to the arrest of eight members of the group, including a lawyer thought to be the main link between imprisoned Eta members and the group's leadership.

"The tentacle that allowed Eta to control prisoners has been broken up," Interior Minister Jorge Fernández Diaz told reporters.

But it later emerged the raid had nearly been jeopardized by the press chief of Spain's Interior Ministry.

Albert Gimeno tweeted about the sting operation before it had actually happened.

That information was retracted minutes later but the interior ministry on Thursday announced that the public prosecutor on with Spain's National Court would decide whether an investigation was warranted.

That resignation was accepted on Friday with Interior Minister Jorge Fernández Díaz thanking Gimeno for his service.

Spain's current laws do not prohibit ex-members of terror organizations from holding office.

Eta has been weakened in recent years by the arrests of its senior leaders in Spain and France, whose security forces cooperate closely in fighting the band.

The armed group announced in October 2011 "the definitive end to its armed activity", but refused to formally disband and disarm as the Spanish and French governments demand.

Groups supporting the prisoners say there are about 520 prisoners who remain affiliated to Eta, most of them in jails in Spain and France.

Dozens of Eta convicts have been released under a ruling in October by the European Court of Human Rights, which overturned a Spanish judicial doctrine that had extended the time prisoners faced behind bars.