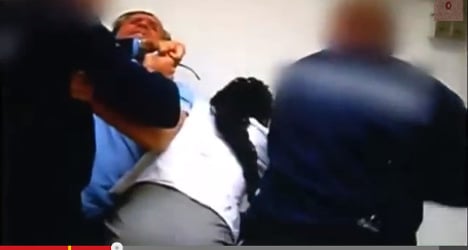 In the video one of the security guards can be seen placing the man in a chokehold while his colleague appears to repeatedly punch the clearly distraught woman. Screen grab: YouTube

The couple were assaulted by security staff while shopping at a supermarket in the Spanish seaside resort of Torrevieja ,Spain's El Mundo newspaper reported on Thursday.

The pair said the incident began after they set off the alarm at the shop's cash registers. They were made to pass through the security barriers several times but nothing was found.

Security guards then took the French tourists to another office where they were spat on and attacked in the presence of their children, the youngest of whom is only seven.

In the chaos that ensued, one of those children managed to secretly film the vicious attack.

The video shows one of the security guards placing the man in a chokehold while his colleague appears to repeatedly punch the clearly distraught woman.

The assault was filmed by a child of the French tourists.

"They grabbed my neck and I thought I was going to die in Spain," said the husband.

"My youngest child couldn't stop crying, I couldn't console him" said his wife.

"If they had found something, well that's different, but I didn't have anything. They looked everywhere and didn't find anything," she added.

After the incident, the couple were treated at a local hospital. They waited several days before filing a complaint as the local Civil Guard as no translator was available at the force's Torrevieja station.

The supermarket involved has since admitted the assault took place and have asked for more information from the external firm charged with security at the shopping centre.

That security firm has refused to comment publicly on the matter, El Mundo reported.

The French family plans to return to home on Thursday.