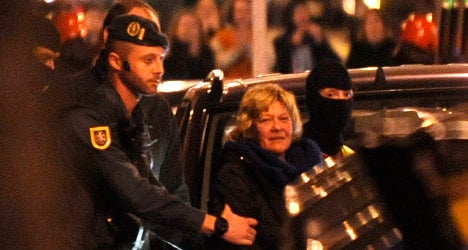 Among those detained on Wednesday was the lawyer Arantza Zulueta (centre) thought to be the main link between those prisoners and Eta's bosses. Photo: Rafa Rivas/AFP

The multiple raids in northern Spain were the latest in a series of blows against Eta, blamed for the deaths of 829 people in a four-decade campaign of shootings and bombings for an independent Basque homeland in northern Spain and southwestern France.

"The tentacle that allowed Eta to control prisoners has been broken up," Interior Minister Jorge Fernández Diaz told reporters.

"It is one more step in the battle for the definitive dissolution of Eta," he said.

An interior ministry official said eight people had been detained in all in police raids in the Basque Country and Navarre, northern Spain, but declined to give further details.

It later emerged that Spain's Interior Ministry told media outlets of the raid via Twitter before it had actually been carried out by the Civil Guard.

That information was retracted minutes later but the public prosecutor with Spain's National Court will decide whether an investigation is warranted.

But the interior ministry said all arrested had gone ahead as planned.

Among those detained on Wednesday were Arantza Zulueta and Jon Enparantza, lawyers representing various Eta prisoners, and thought to be the main link between those prisoners and Eta's bosses.

The arrests came two weeks after Eta prisoners said they were prepared to drop their insistence on a general amnesty and instead seek their release through legal channels.

The softening of the prisoners' demands appeared to be an attempt to engage the Spanish and French governments, both of which refuse to negotiate with Eta, designated a terrorist group by the European Union and the United States.

Freed Eta convicts on Saturday called for all their jailed comrades to be released, in a gathering that enraged victims' families.

The armed group has been weakened in recent years by the arrests of its senior leaders in Spain and France, whose security forces cooperate closely in fighting the band.

Eta announced in October 2011 "the definitive end to its armed activity", but refused to formally disband and disarm as the Spanish and French governments demand.

Groups supporting the prisoners say there are about 520 prisoners who remain affiliated to Eta, most of them in jails in Spain and France.

Dozens of Eta convicts have been released under a ruling in October by the European Court of Human Rights, which overturned a Spanish judicial doctrine that had extended the time prisoners faced behind bars.