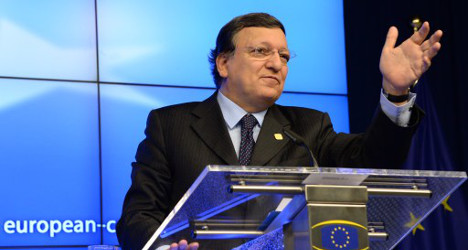 Brussels "doesn't have the power to say whether this (independence for Catalonia) is good or bad", said a spokesperson in reference to the contents of the letter from European Commission president José Manuel Durão Barroso to the president of Catalonia Artur Mas.

Barroso's short letter came 20 days after Mas sent a letter to European leaders asking for them to support the region in its bid to hold a non-binding vote on self-rule in November 2014.

Catalonia is one of Spain's wealthiest regions with over 7.5 million inhabitants, and with a language and culture that set it apart from the rest of Spain.

Many people in the region resent that taxes paid by them go to other regions of Spain during a period of economic hardship and austerity measures.

There has been popular support for independence with hundreds of thousands of people forming a human chain in support of the idea on the region's national day in September 2013.

The European Commission has previously said an independent Catalonia would have to leave the EU, a fact which Mas has since conceded.

"It could become ridiculous," Rajoy added.

"Opening a melon without knowing how to close it is a bad idea," said the Spanish leader of Mas' drive towards independence.

Madrid considers Catalonia's plans for a vote on self-rule illegal and unconstitutional. Rajoy has already stated the planned vote won't go ahead.

But Mas strongly criticized the position of the central government on Tuesday. "This is the 21st century, not the Civil War," said the Catalan leader during a press conference.

"The society of Catalonia should be able to express itself without fear of failing to live with the rest of Spain or causing family break-ups," he added.