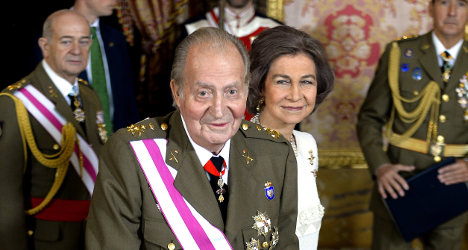 The military ceremony on Monday was shortened for the second straight year because of the king's difficulty in walking following several hip operations. Photo: Gerard Julian/AFP

Wearing a brown military uniform, a thin-looking king, who turned 76 on Sunday, stammered several times during a ten-minute speech at the Royal Palace following the parade in which he thanked Spain's armed forces for their "commitment and hard work".

The king walked slowly and appeared tired as he greeted Prime Minister Mariano Rajoy and several cabinet ministers at the start of the ceremony, which was also attended by his son and heir Felipe.

The ceremony was shortened for the second straight year because of the king's difficulty in walking following several hip operations.

During his most recent procedure in November, surgeons replaced his left hip, his ninth operation since May 2010.

Juan Carlos is widely respected for his role in Spain's transition to democracy after the death of dictator General Francisco Franco in 1975.

But his popularity has plunged over the past three years, largely due to a corruption scandal centred on his son-in-law and a luxury elephant-hunting trip the king made to Africa in 2012.

His health problems together with the scandals have raised speculation about the future of his reign.

The number of people with a high or very high opinion of the king fell nine points over 2013 to 41 percent, according to a poll published on Sunday in daily newspaper El Mundo.

SEE ALSO: The Local Vox Pop: Should the King abdicate?

The number of people wanting him to abdicate in favour of Felipe surged by 17 percent to 62 percent, according to the study by pollster Sigma Dos carried out in late December.

Sixty-six percent had a positive view of the prince and 56 percent thought he could improve the royals' image if he took over.

General support for the monarchy as an institution, however, fell below half to 49.9 percent, according to the poll.

The royal palace and the king firmly denied any thoughts of an abdication.

"I want to express to you, as King of Spain, my determination to continue the faithful fulfilment of the mandate and the powers attributed to me that the constitutional order," the king said in his annual televised Christmas Eve address last month.

A judge has since 2011 been investigating allegations that the husband of the king's youngest daughter Cristina, former Olympic handball player Iñaki Urdangarin, embezzled millions of euros in public funds via the Nóos Institute, a charitable foundation that Urdangarin chaired.

Cristina was on the board of Nóos and with her husband jointly owned another company, Aizoon, which investigators suspect served as a front for laundering the embezzled funds.

The judge is due to rule shortly on whether to summon Cristina herself as a formal suspect for alleged tax evasion and money laundering.

"We have to trust in the justice system. We have always respected the judge's duties. But the only thing we ask is that he finish it soon," Spottorno told public television TVE.

The king also lost sympathy for going on an expensive elephant-hunting trip in 2012 in Botswana while one in four Spaniards is out of work.

The trip came to light when the king fell and had to be rushed back to Spain for medical care. He issued an unprecedented public apology after he left hospital.