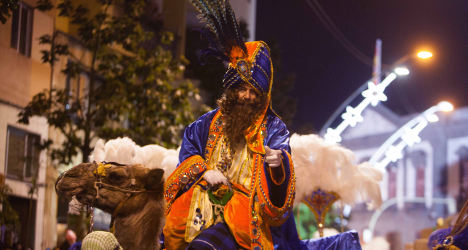 Sweet chaos: A man dressed as King Caspar, one the three wise men or Kings, at the Three Kings Parade (Cabalgata de Reyes) in Tenerife on Sunday. Photo: Desiree Martin/AFP

The parades take place around Spain on the eve of the Feast of the Epiphany, and honour the story in the Gospel of Matthew of the coming of three wise men to bring gifts to Jesus.

The events are hugely popular with the country's children, with the costumed kings throwing sweets to members of the crowd. People come with plastic bags, sacks and even umbrellas to better harvest the crop of sweets.

But safety restrictions were tighter this year after a six-year-old Malaga boy was in 2013 run over by a Christmas carriage while collecting sweets.

In Madrid, Mayor Ana Botella said the kings would only be able to give children sweets if the streets they were passing through were equipped with appropriate security fencing.

In related news, thousands of Spaniards this year signed an online petition asking for 'real black people' to play the role of King Balthazar during the traditional parades.

This character is often played by someone in blackface.