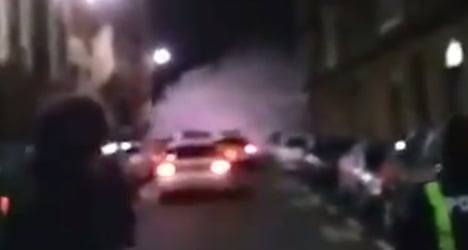 A wave at the end of the street in Santander, northern Spain. Screen grab: YouTube

Spain's weather agency AEMET has declared a 'yellow alert' for the country's Atlantic coastlines with heavy winds and huge swells expected to continue throughout Tuesday.

The low pressure system is now over the Atlantic ocean with the strongest winds in Spain being experienced in the northern region of Galicia.

The heavy weather has already claimed the life of one man — a 50-year-old who was visiting the coast with the ashes of his recently deceased father. Two other members of his family are still missing.

As the tweet below shows, Portugal and Ireland are also bearing the brunt of the heavy weather.

This dramatic video, meanwhile, shows a wave coming down a street in the northern Spanish city of Santander on Monday.

Meanwhile, in this video of waves crashing into the Galician coast, it is clear that the excitement was all too much for one group of onlookers.

This stunning image also captures the drama of the weather in northern Spain at present.