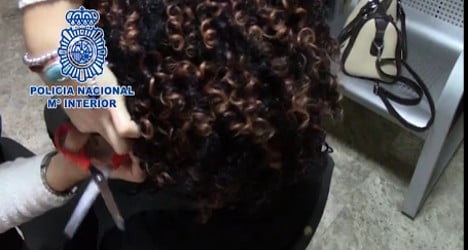 Both were carrying 1.2 kg (42 ounces) of cocaine under intricate 'fake hair' which was sewn onto a black plastic cap , Spanish police said in a statement.

This black cap was taped to their head and this in turn concealed half a dozen packages of cocaine.

Police said this new smuggling method was very difficult "given the realism of the fake hair".

"The packages were perfectly adhered and did not stick out from under the wigs, which made the narcotics imperceptible."

Spain's close ties to Latin America have made it the key entry point for cocaine from the continent bound for Europe.

Spanish authorities seized more than 20 tonnes of cocaine in 2012, which accounted for 41 percent of the total amount of cocaine seized in Europe that year.

Drug smugglers have used a variety of methods to try to sneak narcotics into the country.

In recent years police have found cocaine hidden inside plastic bananas or shipments of roses and in one case concealed in a cast worn by a man with a broken leg.

Last month, Spanish police arrested a Colombian veterinarian who had tried to smuggle liquid heroin to the United States by surgically implanting plastic bags of the drug into live Rottweiler and Labrador puppies.