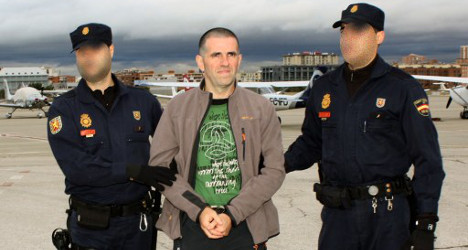 In a statement on December 28 EPPK, representing prisoners who constitute most of ETA's active surviving membership, also said it would consider letting them negotiate individually for release.

Previously, they had refused to play ball with the prison authorities since the prisoners rejected the terms of their imprisonment.

"This statement has no value regarding the government's anti-terrorism policy in general, nor the policy of dispersing prisoners," Interior Minister Jorge Fernandez Diaz told reporters on Friday in his first public comments on the EPPK statement.

Spain has for decades dispersed ETA prisoners across the country, in part to prevent convicted Basque militants from communicating easily among themselves.

Supporters of ETA prisoners have long called for the Spanish government to regroup them in the Basque region.

A committee supporting the prisoners, Etxerat, says there are 520 prisoners who remain affiliated to ETA, most of them spread across 79 jails in Spain and France.

Experts estimate there are only a few dozen active members still at large.

The group announced in October 2011 "the definitive end to its armed activity", but refused to formally disband and disarm as the Spanish and French governments demand.

ETA has been severely weakened in recent years by the arrests of its senior leaders in Spain and France.