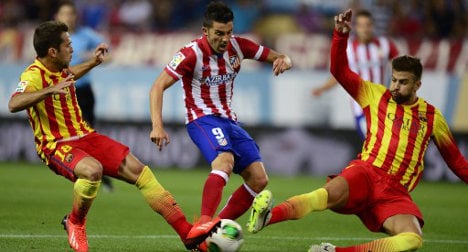 Reigning champions Barcelona and Diego Simeone's Atlético are level on points at the top and are due to face each other in a mouthwatering fixture in Madrid next weekend. Photo: Javier Soriano/AFP

Reigning champions Barcelona and Diego Simeone's Atlético are level on points at the top and are due to face each other in a mouthwatering fixture in Madrid next weekend.

Prior to that, though, Atlético go to Malaga on Saturday and Barcelona entertain Elche on Sunday before both sides have Copa del Rey ties to think about in midweek.

Atlético, who have signed Argentine midfielder Jose Ernesto Sosa on loan from Metalist Kharkiv until the end of the season, will face a Malaga side who won their last two league games of 2013 to climb up into mid-table.

Brazilian full-back Filipe Luis insists that the Rojiblancos are fully focused on their trip to La Rosaleda as they look to keep the pressure on Barcelona.

"Knowing the coach and the squad, nobody is thinking about the Barcelona game. Maybe the supporters are, but we all know that the Malaga match is vital," he said.

"We have not won there in two or three years and it is a difficult venue for us."

Both Atlético and Barça have enjoyed stunning starts to the campaign, winning 15 and drawing one of 17 games in La Liga, but the Catalans have not always performed convincingly since Gerardo Martino took over as coach in the summer.

Nevertheless, the champions have been boosted by the return to the squad of goalkeeper Victor Valdes after injury, while Lionel Messi is also edging closer to a comeback.

Barça midfielder Andres Iniesta is hoping a win against Elche – who sit just two points above the drop zone – can set his team up for a successful 2014.

"A good new year for us means winning everything" said the man who scored Spain's World Cup-winning goal in 2010.

"When you have the chance to reach the top, you have to fight hard, and that's the kind of ambition that we hope will take us into April and May in contention. The team is playing well, and we need to grow from here."

Real Madrid, who sit third in the table, five points adrift of the top two, are in action on the Monday Three Kings Day holiday with a home fixture against Celta Vigo at the Santiago Bernabeu.

The extra time to prepare for that game was used up playing in a glamour friendly against Paris Saint-Germain in Qatar on Thursday, which Carlo Ancelotti's team won 1-0 thanks to a first-half goal from young striker Jese.

"We are coming from behind but we have the whole second half of the season to come back and win the league," Ancelotti said.

The first weekend of the New Year features the enticing prospect of a Basque derby between fifth-placed Real Sociedad and Athletic Bilbao at Anoeta.

Athletic sit four points clear of their neighbours in the final Champions League qualifying position and have lost just one of their last 10 Liga games.

Meanwhile, la Real, who finished fourth last season, have doubts over several players for the game, including the influential Xabi Prieto.

That is not the only derby on the cards, with Valencia entertaining city rivals Levante at the Mestalla in what will be their first game since the appointment of Argentine-born former Barcelona and Spain striker Juan Antonio Pizzi as coach.

Pizzi, who led San Lorenzo to the Argentine Torneo Inicial title last month, has replaced the sacked Miroslav Djukic in charge of Los Che, who sit level on points with Levante coming into their first game of 2014.