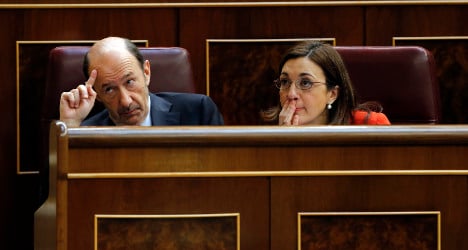 The party on Thursday called for an extraordinary session in Spain's parliament to discuss what PSOE parliamentary spokesperson Soraya Rodríguez called a "shameful" draft abortion law.

The PSOE petition was backed by the left-wing IU with both parties calling for Justice Minister Alberto Ruiz-Gallardón to face questioning in parliament.

Spain's Popular Party (PP) government recently green-lighted draft legislation which would overturn a 2010 law that had allowed women to freely choose abortion in the first 14 weeks of pregnancy.

The new draft legislation, by contrast, would allow abortion only in cases of rape or a threat to the physical or psychological health of the mother.

The law has yet to be passed but the PP holds a clear majority in the country's parliament.

Opponents say the move is a step backwards for women's rights in progressive Spain.

To act "against the rights of more than 50 percent of the population is a clear attack on our democracy," PSOE spokesperson Rodríguez told Spain's laSexta television station on Thursday.

She also called for the parliamentary vote on the issue to be held a secret — a move which would more likely see the law not be approved as several figures within the government have already come out against the draft abortion law.

"No-one can deny anyone the right to be a mother and no-one can oblige anyone to a be mother either," José Antonio Monago, the PP head of government in the western region of Extremadura, said in an end-of-year address on Monday.

The PP head of the regional government of Galicia Alberto Núñez Feijóo has also called for the abortion bill to be changed to win broader support.

On Tuesday the head of the PP's youth wing, the NNGG, also spoke out against the planned changes.

"The state shouldn't complicate things more," said Javier Morado, talking about the "difficult" decision to abort in the case of children with deformities. He added that the draft law was not yet "definitive".