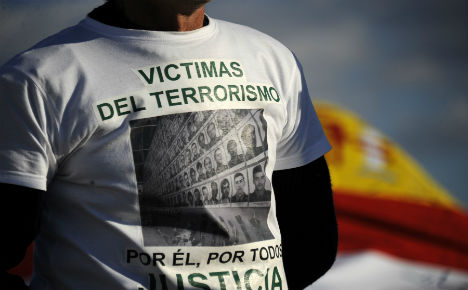 A group of victims of terrorism protest against the release of a jailed member of Basque armed separatist group ETA, outside the Puerto I prison in Puerto de Santa Maria. AFP/Gogo Lobato

The prisoners gave ground on one of the most sensitive aspects of the stand-off between ETA and the Spanish and French authorities — the terms of their jailing and potential release.

In a statement on December 28, EPPK, a collective representing hundreds of jailed ETA members, dropped its long-standing demand for a general amnesty.

The collective, representing prisoners who constitute most of ETA's active surviving membership, said it would consider letting them negotiate individually for release.

Previously, they had refused to play ball with the prison authorities since they rejected the terms of their imprisonment.

In its new statement, the EPPK said however: "We could accept that our return home — our release from jail and as a priority our transfer to the Basque Country — be done through legal channels even if this, for us, implicitly entails the acceptance of our sentence."

The statement, published in the Basque newspaper Gara, said EPPK would be willing to "study the possibility of a process where our return home takes place in stages, through individual commitments".

ETA is blamed for the deaths of 829 people in a four-decade campaign of shootings and bombings for an independent Basque homeland in northern Spain
and southwestern France.

The prisoners' message was hailed by the left-wing political groups that have gained influence in the Basque Country since 2011 when they formally renounced violence.

The conservative president of the region, Inigo Urkullu, meanwhile noted "significant changes" in the prisoners' stance. He called for the "urgent" disarming of ETA.

ETA announced in October 2011 "the definitive end to its armed activity", but refused to formally disband or disarm as the Spanish and French governments demand.

The two countries' governments have ignored ETA's request to negotiate its disbandment on conditions such as transferring prisoners to jails closer to home.

The pro-independence party Sortu, formed by former members of the outlawed party Batasuna, hailed the statement as "a top-level contribution to the process of resolving the Basque political conflict", said its spokesman Pernando Barrena.

He called it "a turning point for a change in the penitentiary policy and an end to dispersal" of ETA prisoners in distant jails.

A committee supporting the prisoners, Etxerat, says there are 520 prisoners who remain affiliated to ETA, most of them spread across 79 jails in Spain and France.

Experts estimate there are only a few dozen active members still at large.

Around 60 others have been freed from jail since October, when the European Court of Human Rights overturned a Spanish judicial doctrine that curbed their right to early release.

Supporters of the prisoners plan to hold a rally for them in the Basque city of Bilbao on January 11.

That annual gathering will be particularly sensitive this year in light of the October ruling, which outraged victims' families.

Online newspaper El Confidencial, citing anti-terrorism sources, said ETA might move before January 11 "to lay down some of its arms and explosives" by revealing the locations of caches in France while demanding negotiations in return.

Paul Rios, a spokesman for Lokarri, an association of Basque nationalists calling for a "peace process" for the Basque Country, doubted that such a major gesture was imminent.

"I do not think the time is ripe enough for ETA to take a decisive step towards disarming," he said.

TERRORISM
Why jihadist attacks are an underlying threat for Spain
Url copied to clipboard!