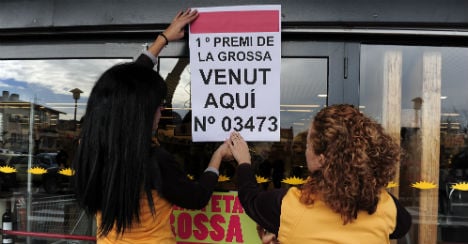 Supermarket workers hang a placard with the number of the winning ticket of Catalonia's new year lottery named "La Grossa" (Fat One) in Llica d'Amunt, near Barcelona. Photo: Josep Lago

The new lottery was dubbed "La Grossa" in Catalan, a nod to "El Gordo", or "The Fat One", the top prize in Spain's traditional Christmas draw which recorded falling sales this year despite its popularity.

The Catalan draw was organised by the regional government, whose leader Artur Mas has called for a referendum in 2014 on breaking away from Spain.

"La Grossa" aped "El Gordo" by broadcasting its similar festive prize draw live on television, a clear gesture of defiance to the central government which has vowed to block the referendum.

"Sales for the lottery have been very high," said shopkeeper Toni Lopez, who gave out three million euros in winnings for tickets sold at his shop north of Barcelona.

"People have really liked buying tickets and many have done so because this is our lottery, the lottery of our country," he said on Catalan television.

The prize money came nowhere near the 2.24 billion euros awarded on December 22 by El Gordo, which has the biggest overall prize pot in the world.

But the state lottery company that runs El Gordo said La Grossa appeared to have eaten into its business this year in Catalonia.

"It has had an impact," said Inmaculada Garcia, head of the Spanish state lottery, last week.

She said sales of tickets for the national draw fell by about four percent across Spain but by more than double that in Catalonia.

Many of the 7.5 million people in Catalonia say they feel short-changed by the central government which redistributes their taxes.

Catalonia was long considered an engine of Spain's economy, but it has suffered, like the rest of Spain, from five years of on-off recession that have thrown millions out of work.

The director of the Catalonia lottery, Elsa Artadi, said profits from La Grossa would be used for social welfare for poor children and youths.