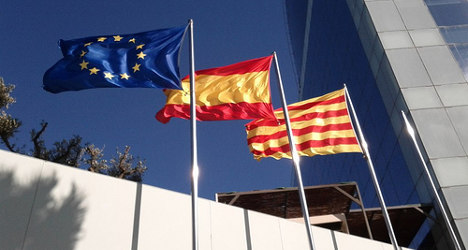 The 210-page book is designed to refute the argument put forward by pro-independence Catalans, El País reported on Monday.

Titled In Favour of Democractic Coexistence, the book is modelled on the UK government's Better Together campaign, launched to combat Scotland's independence movement.

The tome from Spain's foreign ministry has been a year in the works and comes after a Catalan magazine launched a crowd-funding campaign backed by the regional government aimed at having a pro-Catalan independence work sent to 10,000 influential people worldwide.

The authors of In Favour of Democractic Coexistence argue that Catalan independence is opposed by many in Spain and Catalonia.

The book also states an independent Catalonia will have a weaker economy and the region's ambitions to enter the European Union will be thwarted.

"The government is convinced that together we will win, but separately we will lose," the authors write.

Like the UK government's Better Together campaign, the Spanish book uses a question and answer format. It's central argument is that separatism is not democratic and that the Catalan independence movement breaks with the spirit of the Spanish post-dictatorship tradition of resolving difference through dialogue.

Tensions between Spain and the region of Catalonia have been rising in recent months, with a huge pro-independence staged on the region's national day of September 11th.

Recently, Catalan president Artur Mas announced Catalonia would hold a referendum on the issue of independence for the region in November 2014.

But Spain's Prime Minister Mariano Rajoy was quick to say a planned 2014 poll was unconstitutional and would not go ahead.

The Catalan president, however, then told Italy's La Repubblica newspaper the poll would proceed. "The Catalans will win, you will see," he told the paper.