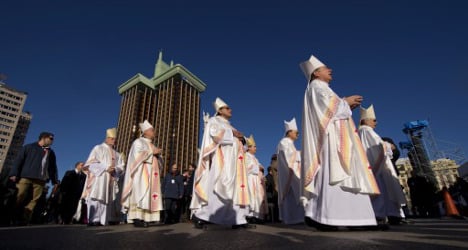 Priests arrive to celebrate an open air mass for the Holy Family in Madrid on Sunday just days after the Spanish Government agreed to tighten the abortion law.. Photo: Pierre-Philippe Marcou/AFP

As chants of "Hallelujah" rang out on loudspeakers, crowds gathered in the city-centre's Plaza de Colon square, some of them carrying Spanish flags and many of them urging the government to go even further and implement an outright abortion ban without exceptions.

Under pressure from the Church, Prime Minister Mariano Rajoy's conservative government announced on December 20th it would roll back a 2010 law that had allowed women to opt freely for abortion in the first 14 weeks of pregnancy.

The new law, yet to pass parliament where the ruling Popular Party enjoys an absolute majority, would allow abortion only in cases of rape or a threat to the physical or psychological health of the mother.

But as the faithful in Madrid sang hymns and waved banners from regions across Spain and other nations including France and Italy, some of them said the government must take more drastic action.

Angelita Yun, 75, who travelled by bus from Pozoblanco in the southern Spanish province of Cordoba to join the mass, said the new legislation should be improved.

"If my mother had aborted I would not be here. It is bad. Abortion is terrible. It is a crime," she said ahead of the mass, which is being held under the banner: "The family is a privileged place to spread the gospel to all nations".

Her friend, 82-year-old Maria Cardador, agreed. "If they say there should not be a death penalty, then they also should not kill small children," Cardador said.

"They are killing so many children in those clinics. They should shut them all down, and that's that."

Emilio Alponzeca, a 51-year-old sailor from Lepe in southern Spain, said the mass, which is organized by the Archbishopric of Madrid, was a "meeting with God and family".

The new abortion law was no better than the previous version, he said, adding: "You cannot take a life."

Ignacio Gonzalez, a 49-year-old salesman from Murcia in the south, travelled with his wife and six children to the mass, which included a live video link to Pope Francis's weekly Angelus prayer in the Vatican's St Peter's Square.

"The new abortion law does not go far enough; it is still possible to have an abortion," Gonzalez said.

During the 2004-2011 rule of previous prime minister Jose Luis Zapatero, hundreds of thousands of believers attended the annual mass, many of them outraged by his Socialist government's legalization of gay marriage in 2005 and the abortion reform of 2010.