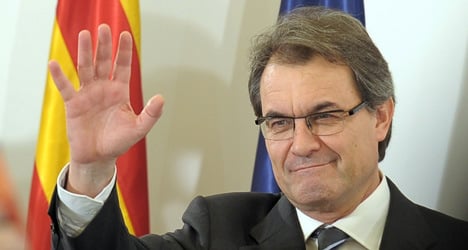 The President of Catalonia Artur Mas has admitted the region may have to temporarily leave the EU in the event of independence. File photo: Lluis Gene/AFP

"I have given thought to the idea that in the initial moment, between the referendum and the proclamation of independence, we could remain outside of Europe," Catalan President Artur Mas told Italy's La Repubblica newspaper in an article published on Friday.

With this admission, Mas acknowledged similar comments made by Spanish Prime Minister Mariano Rajoy and the President of the European Council Herman Van Rompuy. Both of those men have said an independent Catalonia would automatically be outside the EU.

"This would be a shame because we want to remain in the EU," the President of Catalonia told the Italian daily.

"We would need to find a transitional regime to avoid expulsion from the EU. In any case, we would ask to be readmitted.

"We want to stay in the eurozone, in the EU, in Schengen and in NATO," Mas stressed.

The comments from the Catalan president come in the wake of his recent announcement Catalonia would hold a referendum on the issue of independence for the region in November 2014.

But Spain's Prime Minister Mariano Rajoy was quick to say a planned 2014 poll was unconstitutional and would not go ahead.

The Catalan president, however, told La Repubblica the poll would proceed. "The Catalans will win, you will see," he told the paper.

The president also explained the Catalans wanted to be "respected" and that the EU was uneasy about the idea of an independence vote in Catalonia.

"There is a lot of pressure. Sovereign states don't want problems is they can avoid them. But there will be a precedent in Scotland, which votes before us," said Mas, in reference to Scotland's own independence vote in 2014.

"We live like the tenants of a hostile landlord (the Spanish State)," said the Catalan president.

"We simply don't accept the conditions. Our autonomy is very weak," he added.

He stressed the ball was in the central government's court and that "historically we pay far more taxes than we get back for the needs of our people".

"This is why we have a serious fiscal deficit and had to plead for a loan last year, which we are now repaying, and will pay back in full," said Mas of the region's debt to Madrid.

In a press conference on Friday, Spanish Prime Minister Rajoy said an independent Catalonia would "damage all of Spain". He also reiterated his position that the region's independence vote wouldn't go ahead.