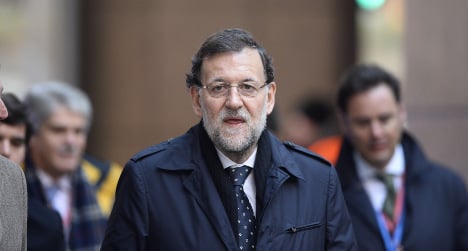 "Twelve montsh ago I said 2013 was a year of reforms and that recovery would start in 2014," Spanish Prime Minister Mariano Rajoy said on Friday. File photo: Alain Jocard/AFP

"If 2012 was the year of tightening, 2013 was the year of reforms and 2014 will be the start of the economic recovery in our country," he said in an end-of-year news conference after Spain emerged from recession in the third quarter.

By the end of 2014, there will be more Spaniards working and less people on the unemployment line, said Rajoy without specifying when jobs growth would begin.

"A year ago I said 2013 was going to be very hard, especially in the first six months but also that things would begin to improve in the second half of the year.

"Well the facts have proved us right," the prime minister added, highlighting that 2013 end-of-year unemployment figures were lower than 12 months ago — the first time this had happened since 2006.

Spain also recently emerged from a nine-quarter recession — the second since the country's crisis began — clocking up third quarter growth of 0.01 percent.

Spain was pushed to the brink of an all-out sovereign bailout in 2012 but was saved in large part by a European Central Bank promise to intervene if necessary on the bond market, lowering the country's borrowing costs.

Nevertheless, the country had to borrow 41 billion euros from its eurozone partners to shore up tottering banks, ridden with bad loans since a decade-long property boom imploded in 2008.

The government, which took power in December 2011, has enacted reforms making it easier to change work conditions and cheaper to lay off staff.

At the same time, it has implemented austerity policies so as to curb annual deficits and rein in the national debt.

But the agency said the outlook for Spanish debt, which is rated just one notch above junk-bond status, was constrained by high private and public debt, low economic growth prospects through 2016 and "remaining inflexibilities" such as the job market.

Spain's government is forecasting a 1.3-percent economic contraction in 2013 and 0.7-percent growth in 2014, a pace considered by many analysts to be insufficient to lead to net job creation.

During Friday's press conference, the prime minister also announced that electricity prices would rise by 2.3 percent in the first quarter of 2014 after his government cancelled a bidding process by energy companies that would have sent bills soaring by 11 percent.

Responding to Friday's comments from Rajoy, Alfredo Pérez Rubalcaba, the leader of Spain's largest opposition party, the socialist PSOE, said all talk of recovery was an "insult".

He said both taxes and unemployment had risen under Rajoy's government and that the only reason no one talked of bailouts was that Spain's banks had already been rescued.

Rubalcaba said the crisis had "started being economic", before becoming political and had ended in a territorial conflict with Catalonia.

The President of Catalonia Artur Mas recently announced the region would hold a referendum on self rule in 2014, a move fiercely opposed by Rajoy who has stated the vote is illegal and won't go ahead.