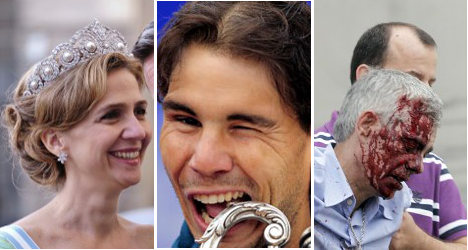 Spain stumbled into 2013 with something of a hangover.

The country had just experienced a general strike, unemployment shot up by nearly 3 percent in January and the country was just embarking on its third year of recession.

Click here to go straight to The Local's gallery of key news events in 2013.

Twelve months later, one could be tempted to think everything has worked out for the best. The country's Spain's recession is over, house prices were up in November for the first time in forever, the country's Prime Minister Mariano Rajoy says there will be jobs growth next year.

Even Barcelona is doing just fine. the club is sitting at the top of the table under new coach Gerardo (Tata) Martino.

But it has been a far from easy year for Spain.

Street protests continue to be a feature of everyday life, whether the target is banks behaving badly, cuts to health spending or new security laws.

At the same time, corruption scandals involving the former treasurer of Spain's ruling Popular Party and the husband of Spain's Princess Cristina have barely been off the front page all year.

In other news, Madrid lost out in its bid to host Olympics in 2020, and also failed to hold onto a mega-casino project it hoped would bring over €30 billion to the region.

The Spanish State also struggled with its federal system. The president of Catalonia threw down the gauntlet saying the region would hold a vote on self-rule in 2013 while some groups in the Basque Country openly celebrated the EU-ordered release of Eta terrorists.

There were moments of human tragedy too. July's train crash just outside Santiago de Compostela on the eve of the region's annual holiday won't be forgotten for a long time.

Read on to see The Local's Gallery of events that made the news in Spain in 2013.