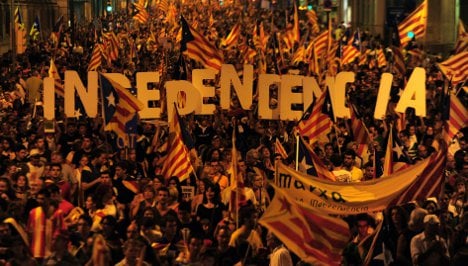 "For many years, we have walked together as we built our democracy, together we solved problems that were no easier than those we face today, always with the ambition of reaching a common goal," he said.

"We must continue to build our future together because there are many things that unite us and should continue to unite us," added the 75-year-old king as he sat behind a desk in a room decorated with red poinsettia plants.

His comments come less than two weeks after leaders in Catalonia, a region in northeastern Spain that generates one-fifth of the nation's economy, promised to hold a vote on November 9, 2014, on breaking away from Spain.

Prime Minister Mariano Rajoy has vowed to block any attempt by Catalan leaders to hold the independence referendum, saying it would be unconstitutional.

Proud of their distinct language and culture and fed up after five years of economic downturn, many of Catalonia's 7.5 million people want to break away from Spain, saying they feel short-changed as the central government redistributes their taxes.

"The Crown believes in a free country, that is fair and united in its diversity. And it believes that this is the Spain that we must all continue to build," the king said.

Workers at the broadcaster called a half-hour strike timed to coincide with the king's speech to protest against budget cuts, and it aired re-runs during the speech.

It was the first time that the station has not broadcast the king's yearly Christmas address.

The king also urged more to be done to strengthen signs that the economy is starting to recover "because we can't accept as normal the anguish of millions of Spaniards who are out of work".

The king, who remains widely respected for his role in steering the country to democracy after the death of dictator General Francisco Franco in 1975, underwent surgery last month to replace his left hip.

It was the latest in a series of operations that have fuelled speculation of a possible abdication, but the palace has flatly denied the king was considering such a move.

The royal family's image has also taken a hit from a fraud probe opened in 2011 into the business dealings of Juan Carlos's son-in-law Inaki Urdangarin.