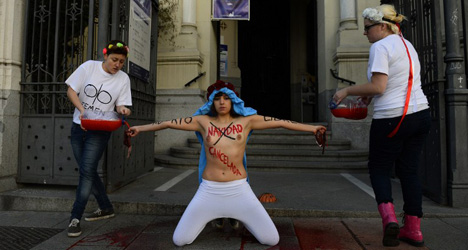 One protestors daubed herself with slogans and exposed her breasts while others poured a symbolic red liquid. PIERRE-PHILIPPE MARCOU / AFP

A member of the protest group Femen kneeled on the pavement baring her breasts with the slogans "Christmas is Cancelled" and "Free Abortion" daubed on her chest.

Two other activists circled her, spilling a red liquid on the ground outside the city centre's Church of San Manuel y San Benito, shortly after worshippers celebrating morning mass had left the building.

One of the three protesters, who gave only her first name, Carmen, criticised the conservative government's new abortion restrictions.

"We are going back to the dictatorship," she complained.

Under pressure from the Roman Catholic Church, Spain's government agreed on Friday to roll  back a 2010 law which had brought Spain into line with much of Europe by letting women opt freely for abortion up to 14 weeks into pregnancy.

Ministers adopted draft legislation allowing abortion only in cases of rape or a threat to the mother's health. The bill is almost certain to be enacted because the ruling Popular Party enjoys an absolute majority in parliament.