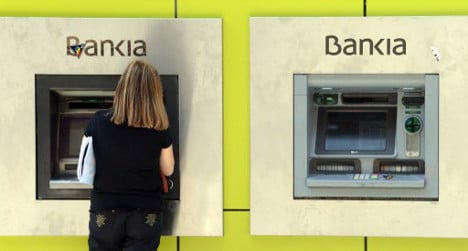 On Monday, Bankia will enter the IBEX-35 index of top listed companies, capping a rollercoaster ride for the bank, and the country.

Born in 2010 from the merger of seven troubled savings banks, including Caja Madrid, Bankia listed in July 2011 with great ceremony, touting its "enormous potential" and its likely role in "dynamising" the Spanish economy.

Less than a year later, in May 2012, Spain's government had to nationalise Bankia and pump in €20 billion ($27 billion) to avert its collapse as the lender drowned in bad loans and revealed ever deeper financial losses.

Soon after, Spain's eurozone partners agreed to offer the country a rescue loan of up to €100 billion to shore up Bankia and other shaky lenders threatening the whole economy.

Spain ended up using €41 billion of the loan in a reform programme, which expires January 23.

"Bankia was part of the problem of the Spanish economy," Economy Minister Luis de Guindos admitted recently in a news conference.

"Today, it is part of the solution."

On January 2 of this year, as Bankia restructured, it was removed from the IBEX-35 index.

Its return to the index on Monday comes exactly one month before Spain completes the banking reforms agreed with Europe.

Now the fourth largest Spanish bank with a market value of €12 billion, "it was an obvious candidate to return to the IBEX-35," said Javier Urones, analyst at the XTB brokerage.

"It is a good sign because it gives the stock a lot of visibility, opening it up to the interest of many international investors," Urones added.

Jorge Soley, financial management lecturer at the IESE Business School, said the return to the IBEX-35 index was a reward for the bank's clean-up under a new team.

"It has done its homework," he said.

In shedding doubtful property-related assets and selling several investments, it emerged from the red to post a net profit of €161 million in the third quarter.

Now Bankia, which boasts seven million customers, is "a solvent and well-capitalised entity," said its chief executive, Jose Ignacio Goirigolzarri. "We should make it profitable."

Shareholders, too, have had to swallow bitter medicine, watching the stock crash 90 percent since listing.

When the Bankia chief gives speeches, he is regularly greeted by dozens of pensioners decrying the loss of their savings in preferential shares that the bank had persuaded them to buy.

"It is a bank with a very bad image in Spain," said XTB's Urones. "It still has a long way to go to be on a similar footing to other heavyweights of the Spanish financial sector."

Bankia's greatest liability? "Its property investment portfolio," Urones said. It is almost entirely based in Spain, which is groaning with unsold homes.

"It still has a lot to do," warned Lloyds Bank analyst Alberto Roldan. "It has to finish restructuring, sell branches, reorganise the size of the group, optimise its client portfolio and, don't forget, the last stage: returning the (public) money that was injected."

Some 30 former Bankia executives are being pursued in the courts for fraud, embezzlement and falsifying accounts.

What does the future hold for Bankia? Being sold. The European Union has given the Spanish government, which owns 70 percent of the capital, until 2017 to privatise the bank.

The government says it has already seen signs of interest, though some analysts say there is no hurry with much of the bank's restructuring still to be completed in 2014.

"It has until 2017 to try to clean up its image, push up its share price and regain investor trust," said XTB's Urones.