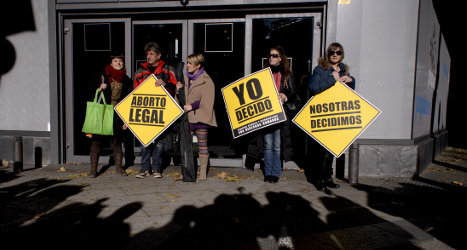 Pro-choice protesters with placards saying "I decide" and "legal abortion" outside the the entrance to the ruling Popular Party (PP) headquarters in Madrid on Friday. Photo: Dani Pozo/AFP

Launched by Spain's conservative government after pressure from the Catholic Church, the draft bill rolls back a 2010 law which brought Spain into line with much of Europe by letting women opt freely for abortion up to 14 weeks of pregnancy.

Ministers adopted a draft bill for a law which will allow abortion only in cases of rape or a threat to the mother's health, Justice Minister Alberto Ruiz-Gallardon told a news conference.

Groups defending the right to abortion held protests against the reform on Friday outside the prime minister's offices and called demonstrations in other cities around the country.

They say the reform will roll back the decades in Spain, returning to conditions similar to those of a more restrictive 1985 law.

Ruiz-Gallardon said the new bill would penalise those who carry out abortions but would not criminalise women for having the procedure.

On the other hand, it would toughen the conditions for aborting in cases of malformation, which the current law authorises freely up to 22 weeks. It would also oblige girls aged under 18 to get their parents' consent to have abortions.

The bill guarantees the "defence both of the protection of life of the unborn and of women's rights" and would "act always in the interests of the woman", the minister told reporters after a cabinet meeting.

The deputy leader of the main opposition Socialist Party, Elena Valenciano, vowed to fight the change.

The bill is likely to pass through parliament, however, where Rajoy's Popular Party holds a strong majority.

Luis Enrique Sanchez, the head of Spain's Planned Parenthood Federation, complained the reform would take Spain back to a time "when Spanish women had to go to England and France to terminate their pregnancies".

Women who cannot afford that "will go to underground places", Salim Chami, a gynaecologist at the Isadora abortion clinic in Madrid, told AFP.

"We welcome that they have finally decided to end the right to abortion," said Gador Joya of the campaign group Right to Life.

"This is no doubt a step towards our aim of achieving zero abortions."

A study by pollster Metroscopia published in April in centre-left newspaper El Pais indicated that 46 percent of Spaniards favoured keeping the law in its current form, while 41 percent wanted a stricter system.

The delay drew cries of impatience from the Roman Catholic Church hierarchy.

In April, the head of Spain's Catholic Church, Cardinal Antonio Maria Rouco Varela, said the 2010 law had "led to a rise in the number of abortions to terrifying levels".

Campaigners dispute the effect of the legal changes on abortion numbers, however.

"Restrictive laws do not reduce the number of abortions," said Yolanda Rodriguez, a leader of Doctors' charity Medicos del Mundo, in a statement on Friday.

"All they do is oblige women with fewer resources to terminate their pregnancies in unsafe conditions, which can put their lives in danger."