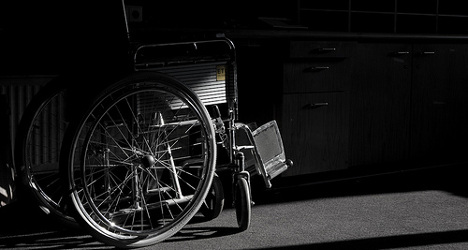 The police who were on special Christmas duty stopped the couple near the Mercado de Olivar market in the city of Palma de Mallorca.

Their suspicions were aroused when they saw the man with a pronounced limp pushing a woman in a wheelchair. On the woman's lap were two large pieces of lamb.

When the police questioned the couple, they insisted the meat was intended to be "a gift".

The agents let the pair go, but inquiries at the nearby market revealed meat had been stolen in recent days.

Security camera footage revealed the man police had spotted earlier using a hook to activate the emergency exit for the market's meat lockers. He was then able to take as much meat as he wanted.

The meat thief was subsequently taken into custody for breaking and entering.